“Consider, for example, such varied assassins as leaded water, pills, red meat, too much sun…. Consider, for a moment more, that of the many things that kill, countless are appealingly beautiful as well as lethal, seducing artist and viewer. How to handle these “killers” in such a way that the intended expressive implications are conveyed, is as formidable an artistic challenge as engaging the more overt content implied by the show’s title.” -Norman Lundin 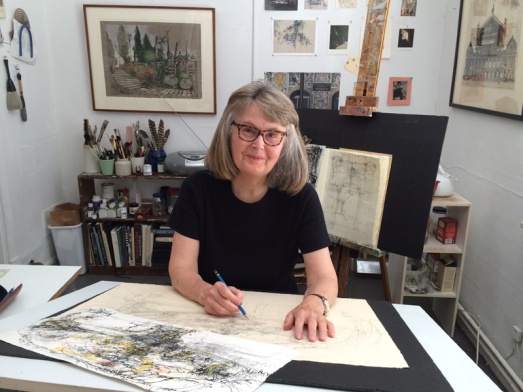 1. In what way is your work a reflection of the theme “Things That Kill”? Is your work for this show in line with or an exception to your usual way of working?
The work in this show is not like the drawings of late 19th century architecture that I usually show. These are closer to the more private work in my sketchbooks and drawings that I did with my School of the Art Institute of Chicago anatomy students at the Field Museum of Natural History. Dover Beach, the Matthew Arnold poem ends: “….we are here as on a darkling plain Swept with confused alarms of struggle and flight, Where ignorant armies clash by night.” The words Things that Kill brought Arnold’s poem to mind. I decided to reopen a series of drawings that I made in 2000. The series was meant as an elegy for my father, who loved the poem and often read it aloud. It felt appropriate to bring together three things that interest me deeply: drawing the skeleton, handwriting, and maps. 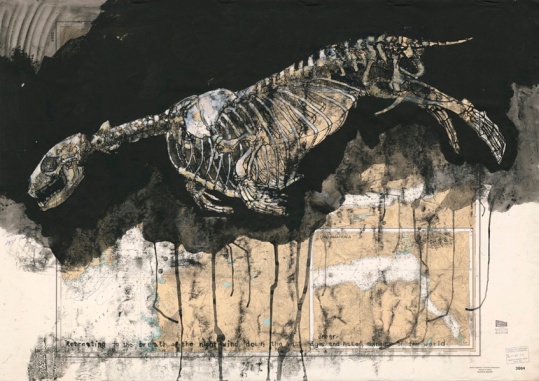 Skeletons of animals that were killed or died, relate to the theme of Things that Kill, but even more directly, the skeleton of the harbor seal, an animal that looks so humorous and friendly in life, has a very clearly carnivorous skull! This skeleton appeared unexpectedly last fall in my local library. It was placed in the library by Seadocs, an organization that concerns itself with the health of littoral regions of Puget Sound. I was delighted to have such a beautiful specimen to draw. 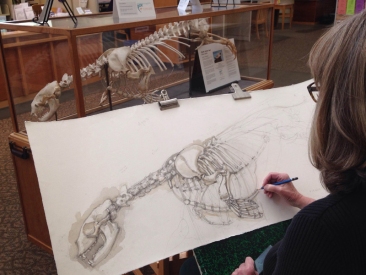 2. How did you approach the subject matter?
I have always liked writing faint little notes to myself on my drawings, but formally combining words and images is more difficult for me because the result often looks self-conscious and stiff. The ink transfer method that I have been using for this series makes drawing and writing feel much the same and smoothes out the difference between images and words.

To make an ink transfer, you roll out etching ink on a large piece of glass, place the paper on the soft wet ink and draw on the back with a broad unpointed pencil. When you lift the paper up, the image is backwards on the back of the paper. The resulting lines are thick and greasy and if you have touched the paper your fingers and hands make prints too. The out-of-control randomness of this works well with the irregular forms of islands and coasts shown on the nautical charts. 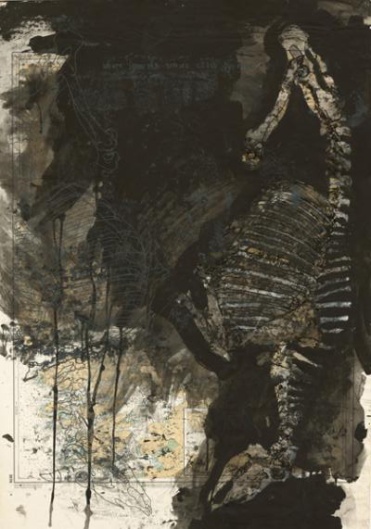 This dark, inky, reversed way of drawing is at one with the grief and rage of the poem . It also feels both in tune and in contrast to the violent calligraphy of the landscape recorded and tamed by cartographers.

3. Are there any anecdotal notes that may give insight to a new viewer about your work in “Things that Kill”?
Here are some sketches that I made when I was working on the skeleton of the Rocky Mountain Goat for Dover Beach #1. 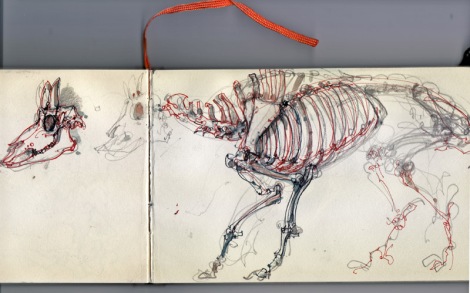 Both larger finished drawings are about ¾ life-size. The Rocky Mountain Goat drawing was done on large sheets of tracing paper that I taped to the glass of the vitrine at the Field Museum. I did this because it was hard to see through the glass, but mostly because if I moved around, then I could draw every part of the skeleton straight on without foreshortening the legs and hooves.