This show features the work of nine Koplin Del Rio artists and completes the series of three IDENTITY exhibitions introducing the gallery’s artists to a Seattle audience. Curator Eleana Del Rio grouped these artists together because they share a common interest in pictorial narrative. They all invite the viewer to interact with the imagery and engage with the work in a manner that allows two narratives—both the artist’s and the viewer’s—to play out over time. 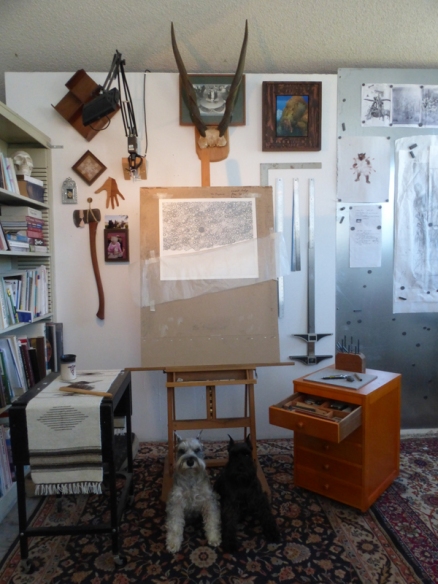 1. What is your ideal working environment? – space, music, lighting, etc.
What I have learned is that I can work almost anywhere – which I recommend: embracing a flexible attitude about your circumstances. I just need a little room because my set-up is simple: easel, taboret, clip lamp, bookshelves. My first studio was in my backyard in an old, partially-converted storeroom. My ideal location would be near where I live. But this place was far from ideal. When I turned on the lights at night, mice leapt off tables and chairs. One night a cockroach crawled out of my pocket when I sat down. I found a black widow under a rag on the floor. The final straw, what ended my ability to work there was that I developed an intense allergy to the Chinese Elms that surrounded the property which produced burning snot each Spring. So no Chinese Elms.

I also need natural light. Sky lights create the feeling closest to being outdoors because of the direction of light. I had a studio for a year with no windows at all. To make it worse it was lit with fluorescent lighting. Working for eight hours a day without natural light depressed my dogs and me too. Working in black and white didn’t help either. But this set up a vividly overwhelming color experience once I went outside at the end of the day. I never knew there were psychedelic shades of gray asphalt! Dirt glowed, chain-link was radiant, rocks and leaves pulsed with life, and of course the sky felt like an infinite, undulating blanket of blues. I have retained the ability to recall these sensations but I don’t miss that studio at all.

A little room. Natural light. And if I could I would command birds to flutter around outside a large picture window during the day. A variety of urban finches and sparrows are fine. But I would like scrub jays and mourning doves too, and somehow for turkey vultures and crows to join in as well. The double benefit of this is there would be no need for music or the radio. And at quitting time I want a Great Horned Owl to land on a large Sycamore by a creek and tell me goodnight as I leave.

2. Is there a specific motivator in getting you into the studio? – after morning news? coffee? after family is asleep at night?
Routine and necessity. I work the day shift now in the studio where I once worked late into the night and early morning. Having a studio outside of the home has created a necessary separation between home and studio life. Studio life can become all-life which is unhealthy as it tends to encourage a little too much self-referential thinking. So I do not wonder when or why to go to the studio. It is a daily labor of my vocation and an integrated part of my life.

3. What is your preferred medium? Do you work on one project at a time or several?
For over ten years now I have worked only with graphite on Bristol. My drawings take months each so I work on just one at a time. Although I have a large wall covered in sheet metal where I hang with magnets a variety of sketches, written ideas, reference material, and doodles for future projects. I always keep an eye on the future while being present and fully engaged in my current drawing. I don’t know how long this graphite-only thing will last – it wasn’t really planned. I recently had to buy $500 worth of my favorite erasers because they stopped making them and I cannot draw without these specific types of erasers. So perhaps when I run out I will try something new? I have a vague plan to eventually work large and in oil pastels once my eyes can no longer focus on the small details in my drawings such as the minute reflection on the tiny eye of a half-inch tall quail.

4. Is there anything you would like to share as personal interests outside of the studio – outdoor activity, cooking, reading, museum/gallery hopping?
It has been hard for me to have interests outside of what I do in the studio because everything is inter-connected. When I read I do not read for diversion I read for learning and inspiration. Most things I do I have my studio mind still active so it disallows my attempts to relax really. The only activity that takes me fully away from the studio is cooking. There is no wishful thinking in cuisine. Especially if you are cooking for others. I take a measure of pride in my abilities and enjoy serving others with something I made that is intended to make them happy. It is a much less selfish enterprise than drawing at least in the short term because your work is immediately and perhaps more objectively judged right there in front of you. Nice wine helps too. Pretty soon I will be finishing off my last 2007 Sanford Sta. Rita Hills Pinot Noir which was a great year for that region as was 2012. 2014 is looking like it will be great too perhaps because of the drought and the vineyard’s ability to fully control irrigation.

5. In what way is your work a reflection of “tradition by way of ‘method’”?
I have a greatly simplified view of art history but it grounds me to a general understanding of where the kinds of techniques I use and teach have fit (or not) within the Master Narrative of the history of art. The way Jansen’s tells it, the ‘beginning’ or at least a major turning point of Western Art is obviously the Renaissance in Italy. And what is the evidence? It is the figure and it is perspective. It is fidelity to the visible world in art. Both setting and characters. Western Art History had its precursors of course but this was the trajectory hitting its zenith. Immediately after, however, is the beginning of the next phase of Western Art. Once some artists proved a kind of objective representation was possible, others began questioning whether this efficacy produced unnecessary limitations so they started tearing apart elements of the figurative tradition and perspectival space. This phase of the narrative which involved challenges to the figure and depictions of space hits its high note with Cubism and then nothing really follows a linear order and art history becomes a matter of cataloging the multiplicity. Through much of this history the illustrators and cartoonists kept their focus on depicting the figure and the space within which it could be made to share. Mid-20th Century cartoonists like Burne Hogarth helped to bring the techniques of the Renaissance back into circulation by using them in comics like Tarzan but also by teaching and writing books. The history of tearing the figure apart was shown to have a counter-narrative and a history of artists who continued to adapt and apply the old lessons rather than to simply reject or attack them without a concurrent desire to keep at least part. So in a way, to draw something as I do is to attach myself to an alternate current in art history.

6. With the examples of your work represented in IDENTITY Insight: Unfolding the Visual Narrative, are there any anecdotal notes that may give insight into your artist vision to a new viewer?
When Jesus Swims He Becomes The Ocean is one of the first and few drawings so far that I have done that have an internal picture frame. That is, the image touches a crisp edge where the drawing abruptly stops. For most of the past decade I have let the image stop near an invisible edge or blur and fade along a softer line. I never wanted my drawings to have to deal with a consistent space in all parts of the drawing but to be able to float as a patchwork of connected pieces- usually connected by a central figure. I also liked the tension of a drawing acknowledging its own limits by stopping before it got cropped. As I move deeper into what I think I am capable of, as I expand my toolbox, and as I continue the need to challenge myself further, this was one compositional device that I had not yet explored. It has significantly expanded the ways I can deal with space development and try to connect pieces that don’t really go together logically.

In When Jesus Swims there are four zones: the landscape, the foreshortened water pattern that touches the shore, the surface of water that Jesus’s head emerges from that supports the floating birds and otter and that also includes the white water pattern that surrounds the bottom of the drawing, and then the window into the underwater area of kelp and fish. These all sort of connect spatially but not really. The foreshortening zooms forward at one pace from landscape to Jesus but then slows down significantly continuing forward to the bottom of the draw. The foreshortening completely stops with the underwater part which is parallel to the viewer. There is an exciting ambiguity in representational techniques and it is fun to play with them like this. I developed a greater appreciation for this ambiguity when teaching and studying absurdly convoluted perspectival processes: like mapping out reflections for instance. You have a lot of freedom to choose how these seemingly rigid concepts get applied. You can do them correctly to fool the eye or you can make a mess and fool the eye some other way. I find it very rewarding to find places in my work where I understand the forces I am manipulating just enough to steer them with confidence while also surprising myself with the results. I had little understanding of what this drawing would look like until I finished it which I think is hard to understand looking at something that looks so well-planned and ordered. It is and it isn’t. I have a notion, I have faith, and I have patience. 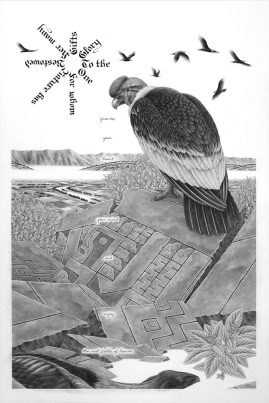